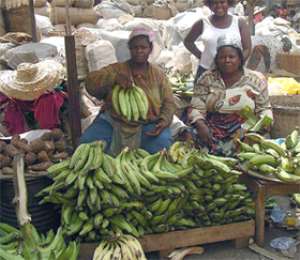 The Upper West Regional Director of Agriculture is projecting a bumper harvest this year after 94,000 farmers registered for the Planting for Food and Jobs (PFJ) programme, an initiative by government to boost food production.

Mr Sasu Yeboah said there was going to be increased food production in the area.

This was when he together with Regional Minister, Alhaji Sulemana Alhanssan, visited a 25-acre maize farm at Moyiri in the Dafiama-Busie-Issa (DBI) District to monitor the PFJ programme.

He said the PFJs crops were doing far better this year than the previous years and so ‘the region is expecting a bumper harvest’.

About 230,000 acres of farms had been captured under the PFJ policy and he called on farmers, who were yet to register with the programme to do so to raise food production.

The team later inspected work on an ongoing Buffer Stock at Busie under the One District One Factory policy.

A total of 1,117 farmers in the district, benefited from the PFJ last year, and for this year, the number of beneficiary farmers had shot up to 3,700.

He advised the youth to take advantage of the programme to better their lives.

Some of the PFJ beneficiaries could not hide their joy and applauded the government for the programme.

They spoke of their determination to expand their farms in the next planting season and pleaded with the government to always make fertilizers and other farm inputs available to facilitate farming activities.

© Copyright 2020 by Agrosealgh.com All Rights Reserved.